For shooters, getting older doesn’t mean having to get out of the game. There are tools and techniques for seniors that can help make their time behind the trigger truly golden.

In his January 2020 article, “The Aging Defender,” then-Managing Editor Kelly Young did an admirable job in chronicling his interview with doctor of physical therapy Joseph Logar—who is also national manager of the NRA’s Adaptive Shooting Program—about the effects of aging on today’s shooters. And while Young’s article should be required reading for every NRA member, I had some issues with it—primarily that it was the article I had wanted to write ever since my personal odometer passed the 65-year mark more than a few birthdays ago.

But Kelly beat me to the draw, editorially speaking, and, to make matters worse, there was the irony of his surname. However, in the spirit of full disclosure, Young readily admitted to being “… a few years shy of 40” at the time. I, on the other hand, have spent more than 40 years (and counting) in a gun-writing career that has taken me from the deserts of Arizona to the jungles of Africa. In the process, I have encountered countless .22 rimfires, muzzleloaders, handguns, rifles and shotguns, from both the hunting and collecting perspectives. Consequently, I feel I am eminently qualified to write about the challenges of being a senior-citizen shooter. So, as an addendum to Young’s article, here are a few other age-related tidbits that I have personally discovered and that will hopefully be of benefit to some of our more “seasoned” NRA members.

One thing I’ve noticed over the years is that as we get older, we become more sensitive to recoil. Not to be confused with flinching, it is simply a matter of our internal framework becoming a bit more fragile, or, as my friend the late radio announcer and “Laugh In” television personality Gary Owens used to say, “I find I’m not healing as fast as I used to.” Gary still shot his nickel-plated Smith & Wesson .41 Mag. for relaxation at the range, but he began doing it with reduced handloads. By that same token, I now primarily stoke my Model 29s with .44 Spl. rather than .44 Mag. ammunition—same gun, but less jarring on the hands and bones. I do, however, still occasionally put a cylinder’s worth of full-house magnums through the Smiths just to remind myself why I don’t do it all the time.

The author’s experience suggests that some sights work far better for his aging eyes than others. Among those he favors are Lyman’s No. 2 tang sight (l.) and Bowen Classic Arms’ Ruger Rough Country Rear Sight (r.) for both single- and double-actions.

When I learned I had to have cataract surgery in both eyes and discussed the various options for the lens implants with my ophthalmologist (you can get bifocal implants or specific fixed-vision lenses), I opted for the strongest long-distance prescription I could get for both eyes. Being nearsighted and knowing I would still need glasses to correct my intermediate and close-up vision, I chose progressive trifocal glasses. The bottom portion of the lens is for reading, writing, adjusting gun sights, etc., the center portion is for working on my computer and the top portion of the lens is glass with no prescription at all, because my cataract lenses give me excellent distant vision. 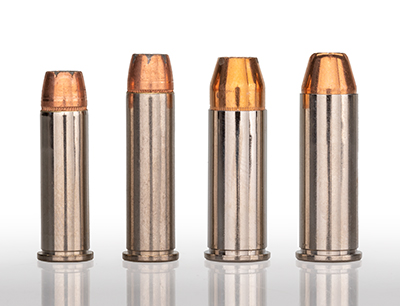 Revolvers and lever-actions chambered for magnum cartridges can be downloaded simply by shooting “specials” to decrease recoil. Examples include (l. to r.): .38 Spl. in a .357 Mag. and .44 Spl. in a .44 Mag.

And, for Christmas, my wife gave me a folding, pocket-size magnifying glass for gun shows to make up for my lost pre-cataract ability to read serial numbers and to see minute stampings without my glasses. I’ve been using this pocket-size magnifier now more than I care to admit, but in the interim, I carried a pair of reading glasses—the type you can buy at the drug store in magnification ratings that normally run from 1.50 to 3, and that are great for close-up scrutinizing but not for distance. I suspect they would work well for those who are as “close-up vision-impaired” as I am, although the miniature magnifying glass is a lot less intrusive and, for me, easier to carry around.

While on the subject of eyesight, the single-action revolvers that I am fond of shooting do not lend themselves to bulky high-visibility aftermarket sights. A good example is my Ruger New Model Blackhawk Bisley. Blackhawks, in general, are notable for their all-black rear sights and their equally all-black front sights, which are incredibly difficult for my aging eyes to properly line up. So, when I had my New Model Blackhawk Bisley customized with Turnbull casehardening (turnbullrestoration.com) and a tuned-up action by Andy Horvath [(440) 458-4369], I also replaced the factory’s micro-click rear sight with Hamilton Bowen’s Ruger Rough Country Rear Sight (bowenclassicarms.com). Although Bowen makes other variations for Ruger and Smith & Wesson revolvers, I found his easy-to-see Rough Country Rear Sight with a square, white-outline notch to be the easiest for me to see. I also had Horvath inlet a brass bar on the front sight ramp for a perfect pairing with the Bowen sight. The only problem is I can’t blame my “frequent fliers” on the gun anymore.

In addition, I have always been partial to open sights on a rifle, but as we get older, those open sights tend to become an exercise in frustration, as that rear sight sometimes blurs into obscurity. That is why you see many vintage Kentucky rifles that have had the original dovetails for their rear sights moved forward—farther from the shooter’s eye—so that the aging shooter could still make out enough of the rear sight notch to properly align it with the front sight. Moreover, until the use of scopes became widespread, peep or aperture sights were the best “quick fix” to accurize a rifle. In his 1961 book, “The Complete Book Of Rifles And Shotguns,” Jack O’Connor wrote, “It has been my experience that a big peep is the fastest of all sights—much faster than the open sight and a bit faster than a low-power scope.” Even in today’s world of electronic reticles and lasers, peep sights retain their century-plus reputation for accuracy. Outfitting a non-collectable rifle with a large peep, or even a ghost-ring rear sight, makes sense. But even some collectable rifles can have their original peep sights adapted by slightly enlarging the rear sight aperture hole so that they are easier for older eyes to peer through. I still hunt with my 1940s-era Winchester Model 71 but always unscrew the factory’s peep sight disk beforehand, leaving a larger hole where the sight screwed into the base; thus, I have an easier-to-see “ghost-ring” through which to sight. Additionally, Lyman (lymanproducts.com) still catalogs its original No. 2 tang sight for Winchester, Marlin and even some Uberti replica lever-actions.

In addition to our eyesight, hearing is also something that begins diminishing as we get older, and most elderly shooters have already lost a fair percentage of their ability to hear. When I began shooting back in the late 1950s and early ’60s, no one was overly concerned about hearing protection, whether it was target shooting on my high school ROTC rifle team or zeroing-in my Winchester 94 carbine at the original Ben Avery Shooting Range outside of Phoenix, Ariz. That ringing in my ears was just an annoying inconvenience, and, besides, it seemed to eventually go away, even though, unknown to me at the time, irreparable damage was being done.

I eventually began stuffing tissue in my ears, but wadded-up Kleenex offers precious little in the way of hearing protection. Nowadays we know better, and muffs or earplugs are de rigueur, no matter how old—or young—the shooter may be. However, for us older folks, earplugs are not enough. In order to protect what little hearing I have left—especially after a rather traumatic middle-ear operation that required a tungsten insert to restore the hearing in my left ear a few years ago—I now use both ear plugs and ear muffs. This not only offers double the protection, but the muffs shield the entire circumference surrounding the ear from magnum-level decibels—something that ear plugs alone can’t do.

Thumbing it back manually (l.) makes a hammer-fired pistol’s slide much easier to rack.

This might be a good place to mention that upgrading shooting equipment can be beneficial to us senior shooters who never throw anything away. For example, I had been using my Peltor Sport Tactical 100 Electronic ear muffs ever since 2007, but because of the tremendous advances made in technology during the past few years, I recently upgraded to Peltor’s newer Sport Tactical 500 Electronic model, which offers 26 decibels (dBs) of hearing protection (compared to 20 dBs of my older model) and dramatically enhances audio, while more effectively blocking out high-decibel sounds like gunshots. In fact, with the Tactical 500, I can hear the range master’s commands even more distinctly than I can with my unaided ear. In addition, this model has Bluetooth wireless technology that syncs to mobile devices and can even be used to make and receive phone calls through the headset, a benefit I have yet to fully embrace; I really wanted the Tactical 500 for its higher decibel rating to protect what little hearing I have left. Peltor also makes a Sport Tactical 300 model that delivers 24-dB hearing protection but without Bluetooth capabilities. 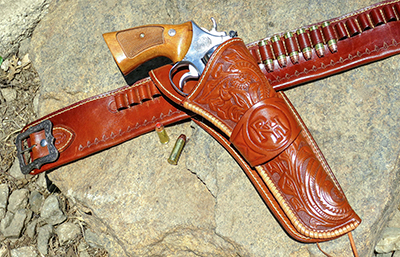 Following shoulder surgery, the author found a cross-draw holster to be much easier to use.

As Dr. Logar points out in Young’s article, muscle tone is another aspect that diminishes as we get older. I remember my late friend, singing cowboy star and NRA Life member Roy Rogers, once telling me that his sixguns seemed to be getting heavier each year. Today, in addition to daily walks, I use an adjustable hand-strength exerciser, along with a hand dumbbell on a regular basis to maintain my muscle tone. Admittedly, these are low-impact exercises, but they enable me to still shoulder and shoot a 9-lb., 8-oz., rifle offhand.

And for those who have trouble racking the slide on a Government Model 1911, I have found that by cocking the hammer first, the slide goes back much easier, as it is not pushing against the hammer’s mainspring. In the same way, my Beretta M9 has a very practical slide design for easier racking, at least for me; those “ears” on either side of the slide make it much easier to grasp and rack. Plus, with most exposed-hammer, DA/SA semi-automatics like the Beretta M9 and 92 variations, you don’t have to struggle to get off that first double-action shot. Keeping your finger off the trigger, cock the hammer first for an easier-to-pull, single-action first shot.

And finally, when I had a pinched nerve in my right shoulder a few years ago, my primary care doctor (who is also an NRA member) suggested that I should consider using a cross-draw holster—as that cross-body motion did not cause my shoulder any pain. Thankfully, my pinched nerve eventually went away, and in the process, I ended up with a couple of new cross-draw holsters—both thanks to my doctor.

To be sure, as we reach that “vintage” stage in life, some of us start requiring a little more maintenance, and yes, perhaps a few new parts, just like the guns we shoot.