Over the years, cartridges come and go, and some even rebound in and out of popularity like the 10 mm Auto pistol cartridge. But every so often, a cartridge makes a name for itself and upholds a reputation that isn’t soon forgotten, even a century after introduction. However, the modern updates do have some advantages that may be worth investigating.

As a hint, all of these modern cartridges fit in a short action as one advantage, among others. This saves weight, adds magazine capacity, speeds cycle time, and you can even see improvement in barrel life, all of which are key benefits as we’ve upgraded technology and updated our rifle cartridges and chamberings. With that said, assume most of those perks come with the territory of going with the modern cartridge.

Something special was born on the Scandinavian Peninsula in 1894: the 6.5×55 mm Swede. Now going strong for 128 years, the cartridge will push a standard 140-grain bullet to around 2,700 f.p.s., which matches the much-more-modern 6.5 mm Creedmoor cartridge. So what does a cartridge 113 years newer provide? With modern BC values in the Creedmoor, energy won’t be a problem. When it comes to availability, it’s difficult to find a company that doesn’t produce at least one 6.5 mm Creedmoor load. Plus, the Creedmoor case is designed a little more efficiently and can withstand higher pressures than the Swede case, making it a bit more versatile. But, it’s worth noting that most big-name ammunition companies, like Hornady—which developed the 6.5 mm Creedmoor specifically for long-range shooting in 2007—make both a 6.5×55 mm Swede and 6.5 mm Creedmoor load that use the same exact bullet advertised at identical velocities. 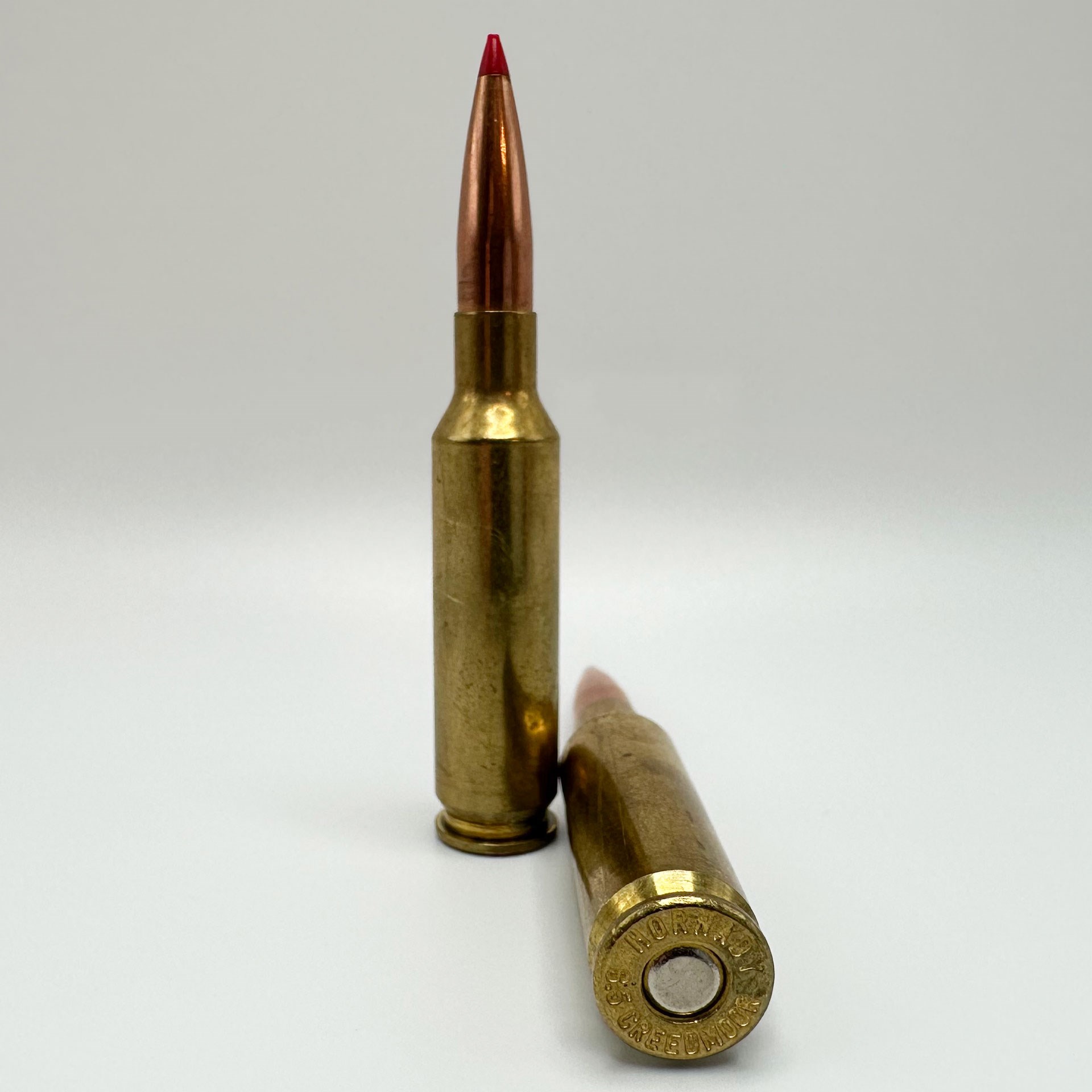 Much like the 6.5×55 mm Swede, the 7×57 mm Mauser, Peter Paul Mauser’s second cartridge design, came about before the turn of the 20th century in 1892. The cartridge initially used bullets on the heavier side of the weight spectrum, with the standard bullet coming in at 173 grains. Often known in British circles as the .275 Rigby, the cartridge was also loaded with lighter bullets in the 140- to 160-grain weight range to improve velocity for the British customers, and the throat was shortened slightly to decrease bullet jump. However, by the time 7 mm-08 Rem. hit the market in 1980 and ammunition components had improved, the much larger case capacity lost its edge. 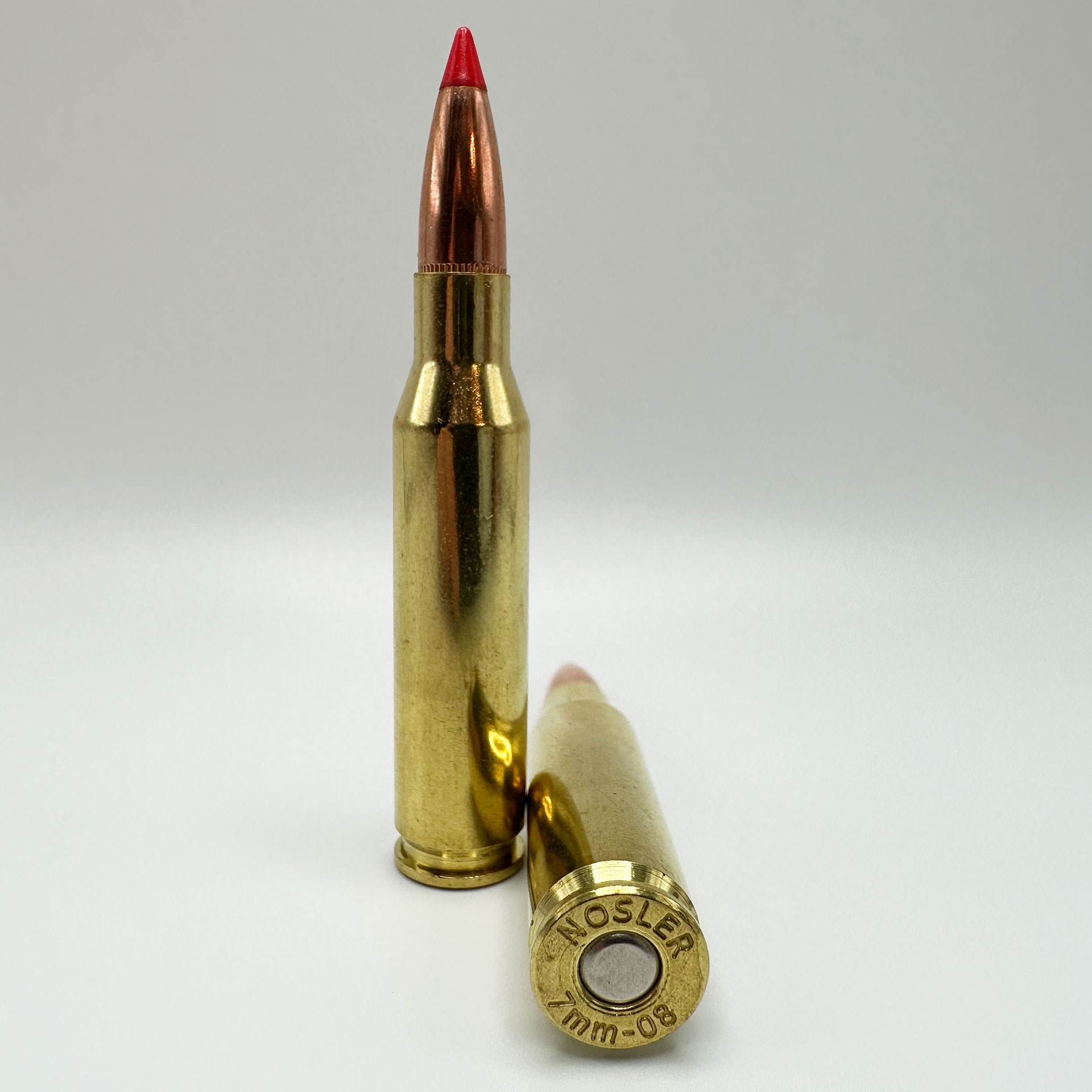 Factory loads, like Nosler’s 150-grain AccuBond Long Range Trophy Grade ammo, has made the 7×57 mm Mauser nearly obsolete. With modern powders, even heavy bullets can be reloaded in the 7 mm-08 Rem. to various degrees of success without losing much velocity. For example, using Hodgdon’s 6.5 Sta-BALL powder, trajectories matching the 6.5 mm Creedmoor can be achieved using bullet weights previously reserved for .308 Win. match-style bullets. Comparatively, the 7×57 mm Mauser, while it can still use the same bullet weights and even the same powder, falls a couple hundred feet per second short of the 7 mm-08 Rem.

I’d be surprised if the readers of American Rifleman didn’t see this one coming from 1,760 yards away. But for those who are new, here’s a quick lesson on America’s beloved .30-cal. darling. The .30-’06 Sprg. was created in 1906, making it the “newest” of the old cartridges on this list, and it was the first U.S. service cartridge to use the concept of a sleek, aerodynamic spitzer-style bullet, compared to the old round-nose bullet from the previous century. It was also used by some of the most renowned firearms enthusiasts in U.S. history, including Teddy Roosevelt and Ernest Hemingway, and the tried-and-true .30-’06 Sprg. is still a plenty-capable round 116 years later. Yet the original loadings didn’t carry the mass they do now, which is why the .308 Win. was touted as the cartridge’s “modern” replacement when it was released almost half a century later in 1952. 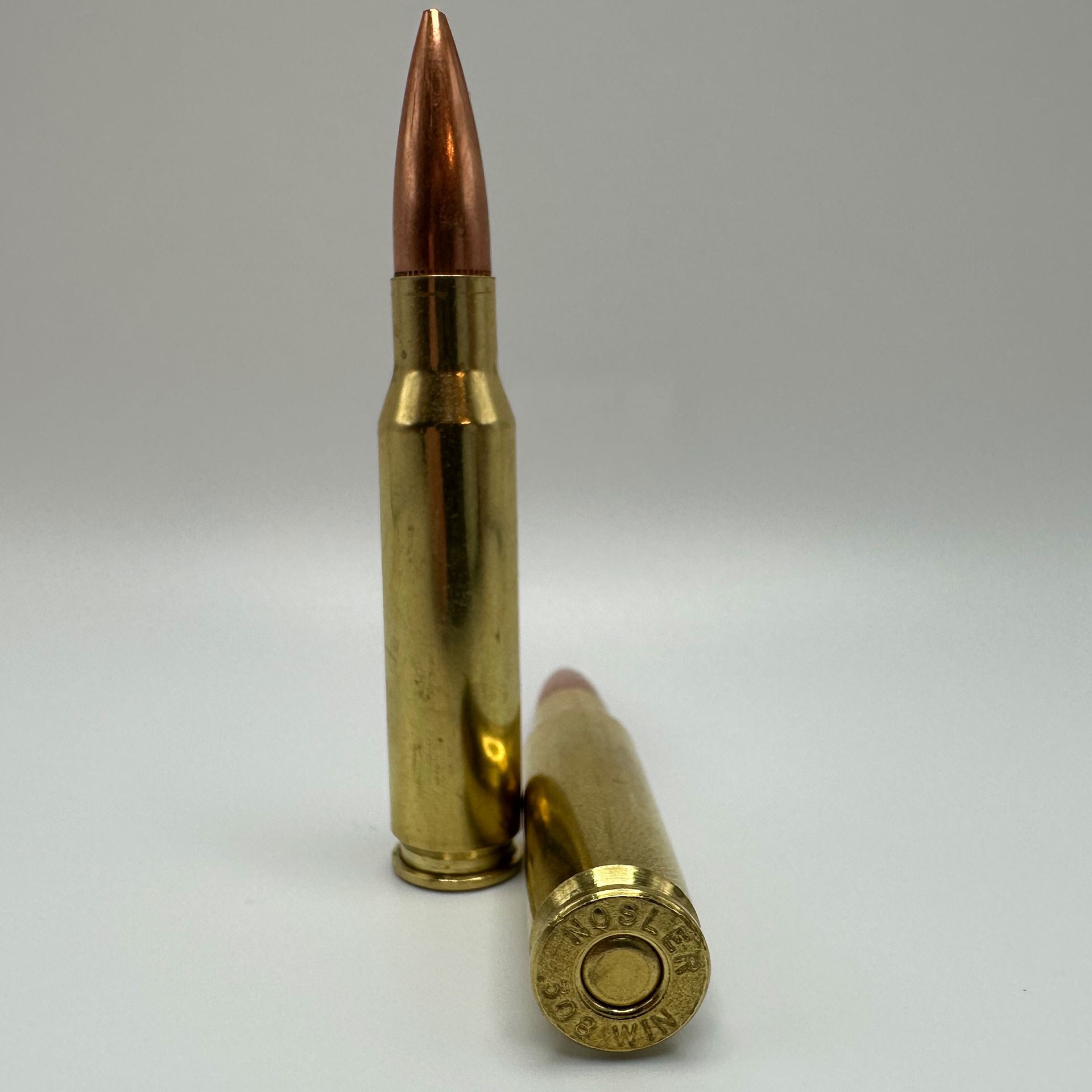 That said, to do a fair comparison, we’ll only reference the older cartridge ballistics to keep within the theme of this article. The original .30-’06 Sprg. loads used a 150-grain bullet traveling at a now modest 2,700 f.p.s. However, .308 Win. loads nowadays will do that and more, reaching nearly 3,000 f.p.s. using the same bullet weights. When attempting to match the velocity of the initial .30-’06 Sprg. loads, one could still load typical modern 168-grain match bullets—which now have much better ballistic coefficients—to provide better trajectories, energy transfer and velocity retention across the board.

This one is unique in that these cartridges do not use identical caliber measurements for their respective loadings. The old-school 7.92×57 mm Mauser, or 8 mm Mauser as it’s also known, is the second oldest cartridge on this list, created in 1888 by Peter Paul Mauser. One interesting thing to note about the 8 mm Mauser is that the cartridge changed bore diameters as it aged, starting with a diameter of .318” initially, then changing to .323” later in 1905. The standard loading utilized a 196-grain bullet moving along at 2,500 f.p.s. 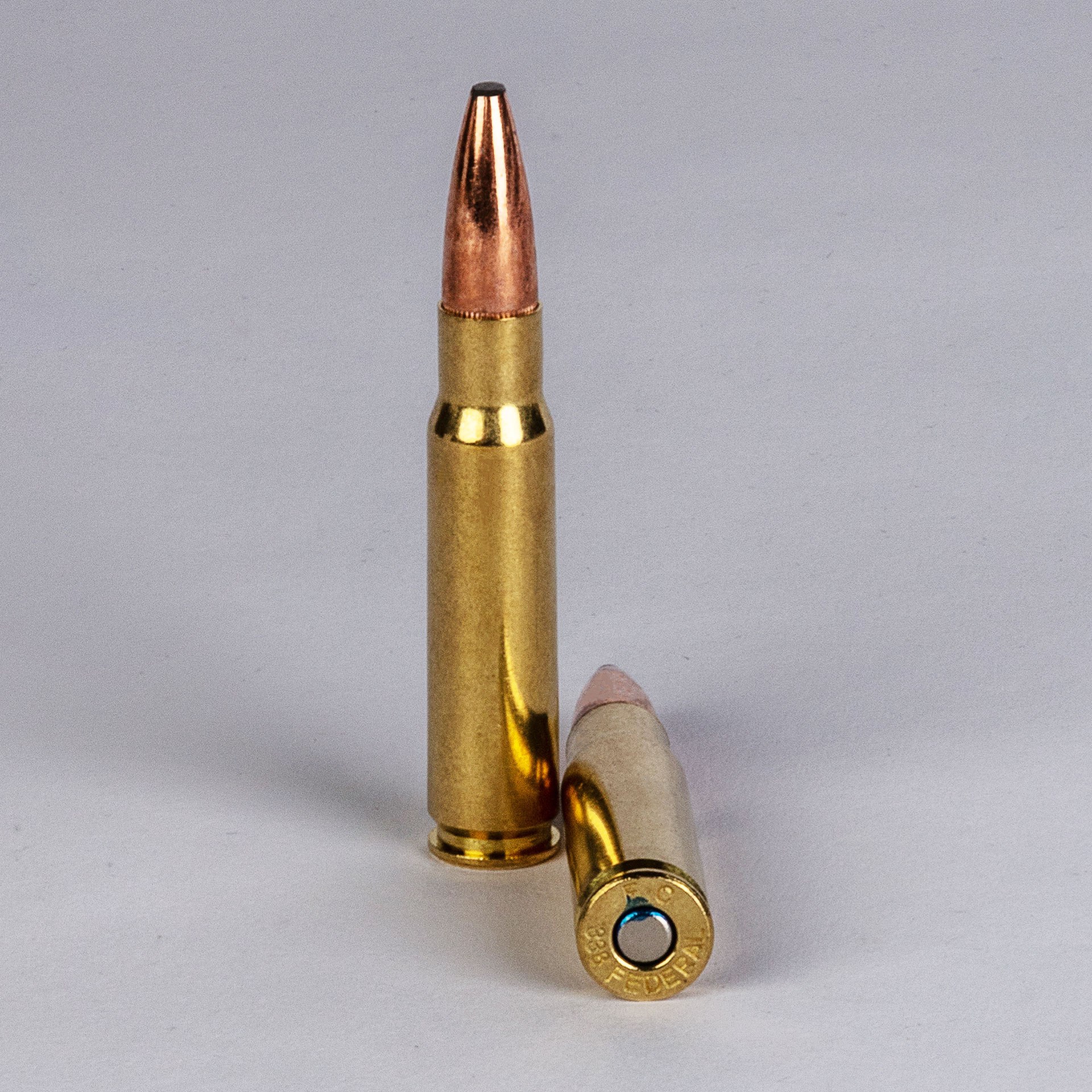 For those looking for a step up in performance, the .338 Federal is the ticket. Designed by Federal Ammunition in 2006, the round launches 200-grain bullets no slower than 2,600 f.p.s. (depending on the load) from any one of Federal’s ammo offerings; the fastest load tops out at 2,700 f.p.s. Shooters will also technically get a larger entry hole, but nothing noticeable to the naked eye. It’s an added benefit all the same, on top of more velocity, more energy and a flatter-shooting round. 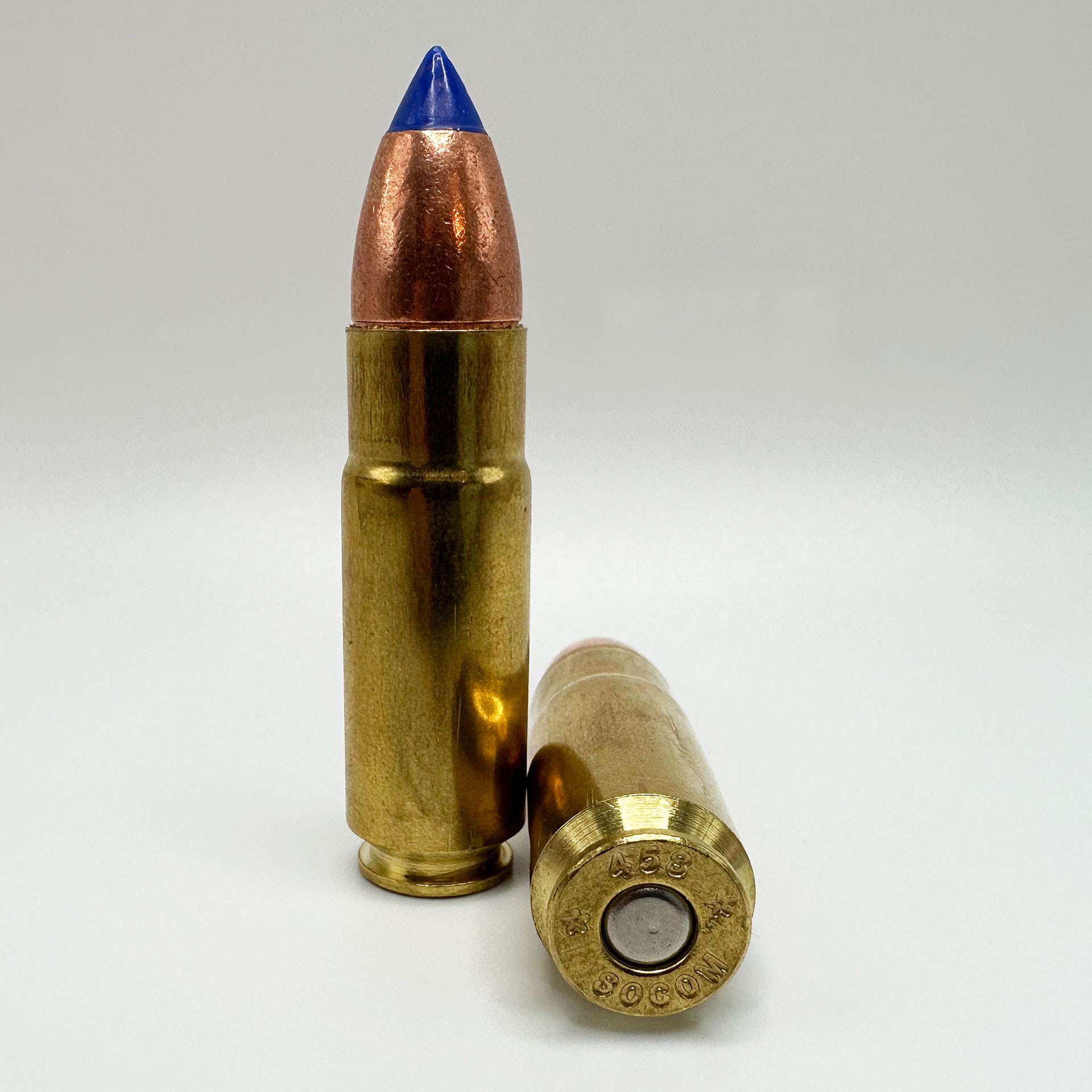 More impressive, though? A cartridge introduced in 2002 can do what the .45-70 Gov’t. does, but fits in America’s favorite black rifle, the AR-15, with nothing more than a barrel swap (though uppers by companies like Rock River Arms will do, too). Pushing 400-grain and 300-grain bullets to speeds around 1,600 f.p.s. and 1,900 f.p.s. respectively, the .458 SOCOM, ironically also designed by and for military purposes initially, puts the time-tested .45-70 Gov’t. not just into a smaller gun, but increases magazine capacity, which, when we’re talking about hundreds of grains in bullet weight in each cartridge, is incredible. It should be considered, however, that magazine capacity for a 5.56 NATO is cut by two thirds when swapping over to a .458 SOCOM, and that there are 7,000 grains in a pound. Also recall that a single .458 SOCOM’s bore diameter is roughly twice that of a 5.56 NATO bullet, and a 300-grain bullet packs on nearly five and a half times the weight of a 5.56 NATO M193 55-grain bullet.

This probably raises the question of why we should even bother with older cartridges? For one, there’s something to be said about the fact that these cartridges still exist. That in and of itself is a testament to their utility. Have we made improvements, and in some ways all but obsoleted these ancient rounds? Sure, but if they weren’t still used, they wouldn’t have lasted this long and still be in production. Secondly, there’s a “cool” factor to using these cartridges in old rifles. Some collectors may scoff or ridicule you, but making a shot or taking a game animal with a cartridge over 100 years old is pretty impressive.

Lastly, it’s important for historical reasons; if we didn’t have these older cartridges before, we wouldn’t have something to build from and compare to when we were coming up with the more modern designs. For example, people still talk about the ballistic miracle the 6.5×55 mm Swede is, the historical context Paul Mauser gave firearms from his contributions, the wars fought with the .30-’06 Sprg., and the cultural icon that the .45-70 Gov’t. became due to the tales of buffalo hunters and Western lore. Without these cartridge’s accomplishments from the past, our present cartridges wouldn’t be so incredible.